Woodland Awakening - The "Smoking of the Land"

All mindfully wildcrafted by me. 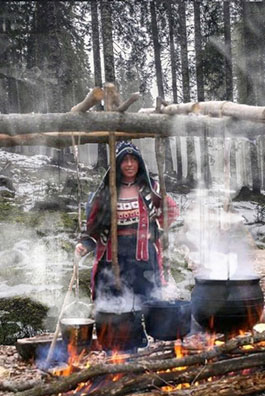 In the early spring, when there are still pockets of snow on the ground in the forest, there is a mysterious natural phenomenon, it appears as though the land begins to smoke.  The "Smoking of the Land" is a sure sign of spring, recognized by those who are close to the land, that the forest is beginning to wake up. The smoke is caused by warm, moist air moving over the cold land.  The air is chilled from below, causing the moist air to condense into tiny water droplets, resulting in the appearance a kind of smoky looking fog.  In Germany, it is said that this phenomenon is caused by the Buschgroßmutter (Bush Mother) cooking in a large, iron pot.  The Bush Mother is an ancient, earth goddess living deep in the woods.  The Bush Mother's warming fire, on which she cooks healing soups and syrups, wakes the nature spirits in the forest.  Among the spirits, she awakens are the feminine tree spirits and moss people and the Green Man.  These spirits stretch and emit their fragrant breath as the forest comes alive.  The forest becomes particularly healing to body, mind, and spirit in early spring as the plants begin to produce and fill the warming air with healing vapors. 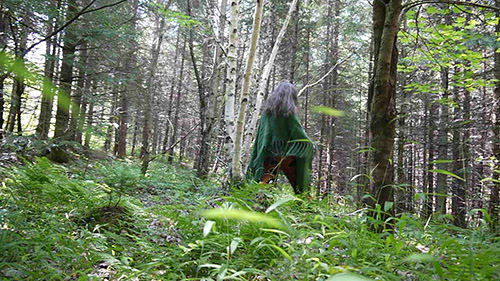 This time of the turning between winter and spring has often been characterized by plague and illness.  In Germany, during epidemics, the Holzfräulein ("Wood ladies") would emerge from the forest to show the people which medicinal herbs could cure or ward off the plague.  These wood ladies were human shaman-healers who lived in the forest and made medicines. Most of the plants available at this time of year would be tree medicines.  Tree spirits are commonly called "The Dryads".  Across cultures, most tree spirits are female.  These Dryads were worshipped in ancient times.  So prevalent was tree worship in old Europe, that in the year 785AD, Charlemagne had to make a decree forbidding the worship of trees and water sources.  It is the Conifers Dryads, with their resinous needles and bark, so healing to the respiratory system, that would have contributed their foliage to the Bush Mother's pot in which was simmering the immune-boosting, mineral-rich, spring saps donated by Birch and Maple Dryads. 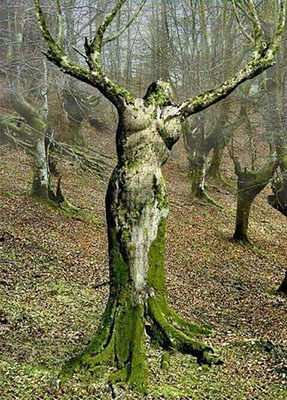 Also, waking up to help heal the ecosystem would be the Moss People.  These creatures are always highly identified with trees and considered to be the trees' guardian spirits. Many Moss People hang from the trees and are the complex plants called lichens, "the lungs of the forest".  Lichens are an association of a fungus and algae. They clean the air of the forest and the amount of Lichens in the environment serves as an indicator of air quality.  Once you are familiar with the fragrance of lichens, you realize that it is omnipresent in the background, always drumming through a healthy forest at a subtle level.  Lichens have a host of medicinal properties when they are slowly extracted in water.  They are antimicrobial, antiviral, anti-tumor and anti-inflammatory.  In appearance, the Moss People are typically short in stature and appear elderly; but this does not imply frailty, rather they are the image of aged wisdom. Lichens first appeared about 400 million years ago.  The oldest conifer trees appeared 300 million years ago and the first leaf trees after that.  So Moss People are indeed the elders of the Forest Community. 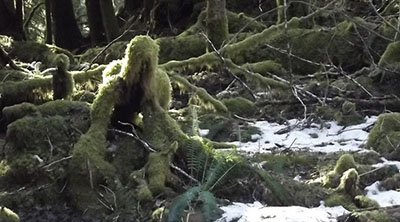 As the sun warms the trees and the snow melts, other fragrances join the early conifer and mossy fragrances to bring healing to the forest system.  Plants and trees may not be able to walk but they are great at chemistry.  The Popular Dryads open their buds sweetening the air to open human lungs with their expectorant and stimulant effects.  The resin that covers poplar buds is harvested by bees and humans for it's antiseptic and analgesic properties as well as it's use in incense.  Poplar bud's fragrance is so sweet and comforting it is no wonder that the buds been historically associated with fairies and love magic.  In Celtic legends, the poplar catkins were eaten with cream for the Feast of Elphame.  In Greek mythology, Zeus was born under a poplar tree.  The fact that such an important god was born under the protection of a tree indicates  a pre-existing, ancient tree cult and just how long Poplar trees have been held sacred 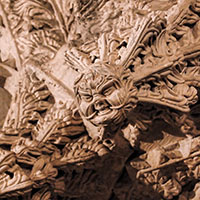 As the Bush Mother adds the final touch of spices to her brew the Green Man awakes. The Green Man is the Celtic symbol of rebirth and the regrowth of plants each spring as the snow melts away.  On the warming forest floor, two of the most fragrant of the forest perennial plants begin to send up shoots, Calamus and Wintergreen.  Calamus grows by ponds and streams.  Calamus root smells warm and spicy.  This root is one of the first foods available when animals awake from hibernation.  The animals dig the roots up and soon their fragrance fills the air.  Beavers and muskrats eat so much Calamus root that they begin to develop a distinctive odor based on it's smell .  Calamus root is useful to both animals and humans for waking up and starting to move after a long winter as well, the aromatic oils filling the root tone the digestive systems of animals and humans for another season of good eating. Also,  As soon as the snow melts, underfoot in the forest is Wintergreen. The leaves and the bright red berries of Wintergreen emit a strong, sharp mint-like scent when they are stepped on, letting the forest community know if anyone has aches and pains, wintergreen is ready to serve.

When I Am Among the Trees

When I am among the trees,
especially the willows and the honey locust,
equally the beech, the oaks, and the pines,
they give off such hints of gladness.
I would almost say that they save me, and daily.

I am so distant from the hope of myself,
in which I have goodness and discernment,
and never hurry through the world
but walk slowly, and bow often.

Around me, the trees stir in their leaves
and call out, “Stay awhile.”
The light flows from their branches.

And they call again, “It’s simple,” they say,
“and you too have come
into the world to do this, to go easy, to be filled
with light, and to shine.”

This is a loose blend packed in a 2 oz. tin