With this incense I wanted to recreate the earthy, forest fragrance

of the sacred oak groves of Ancient Europe

All consciously wildcrafted by me or friends from afar

IN AND UNDER THE TREES: Mistletoe, Fir Club Moss, Tree Moss

AT THE EDGES: Melilotus

MAGICK: A simulacrum of the tannic, dry fragrance of oak wood, leaves and acorns using resins Kua Myrrh and Benzoin

bound together with dried grapes of the vine and red wine 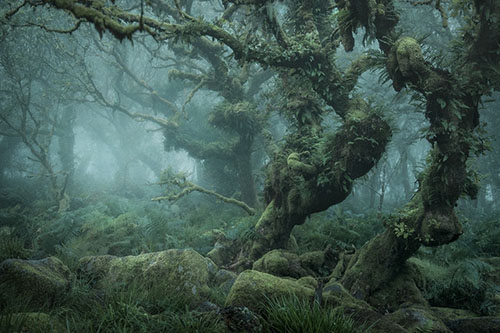 For thousands of years after the last ice age, Europe was covered by vast forests.  The people who settled the dense woodland gathered forest foods and practiced a slash and burn agriculture.  The woodland was at the center of their economic and spiritual life.  Their farms and villages were islands in the vast sea of trees that comprised the European rain forest.  From the trees, they made houses.  From the gift of wood, they warmed themselves and cooked.  They used ashes of burnt trees to fertilize their fields.  They and their domesticated animals fed on the acorns, nuts, and leaves of the trees.  The forest was filled with plant medicines and in the forest, they met the plant spirits that taught them how to use the medicines.  Outside the reaches of the cooking and heating fires, the fragrance of the air must have been extremely complex with scents of leaves, wildflowers, mosses and the earthy smell of enormous amounts of rich compost. 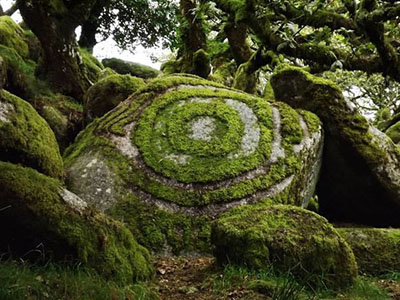 The forest was the incarnation of all the woodland dwellers held sacred.  For them, people and gods came from trees.  But these forest people did not build temples and churches because it was the forest itself that was their church.  The Gauls worshipped a Goddess of the Forest known as  Nematona and she protected the sacred groves, known as nemetons, in an enormous area bound by present-day Turkey, Germany, and Scotland.

Oak's sacredness is found in many place names of old Europe: The Drunemeton, "Sacred Oak Grove" became a Celtic capital in Turkey, The Irish town of Kildare "Church of the Oak" and Durrow "Plain of Oaks". Oak trees are a keystone species that serve as a backbone of the ecosystem, without which the ecosystem would fail. A healthy mature oak supports 2300 species and that number does not include bacteria or micro-organisms.   Oak calls these creatures through secondary metabolites, acorns, and means, as yet, beyond our comprehension.  Oaks are masters of communication and a gateway into the physical and metaphysical worlds.  The ancient significance of the Oak Door, an enchanted gateway, is still filled with meaning.  The passing of young children between boughs of oak for blessing and protection is still practiced in some European folk cultures. 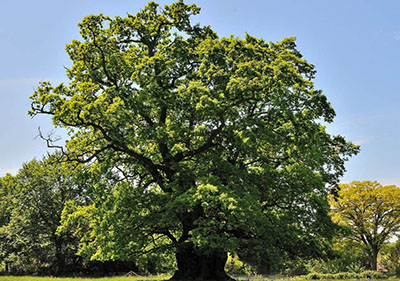 In addition to provisioning humans, oaks also provision wildlife with their copious acorn production.  They provide habitat for birds and feed squirrels and numerous insects that in turn provide food for wildlife. Their association with ectomycorrhizal and saprophytic fungi provide carbon sources for edible fungi, including chanterelles, many kinds of boletes including Boletus edulis, truffles and edible polypores like hen-of-the-woods; all mushrooms appreciated by humans and wildlife alike. These fungal associations promote decomposition and nutrient cycling enriching the soil for all.   Oaks' reputation for solidity is based not only on the great age the trees can reach or the solid character of their hardwood for building and making objects but particularly because of Oak's tolerance and regeneration capacity under slash and burn agricultural activities like that of the ancient woodland people.  A solitary Oak standing alone in an open field is an age-old metaphor for stillness, perseverance and endurance. The thick bark of most oaks makes it highly resistant to fire, except when they are very young. After scarring by fire, oaks have a very high resistance to rotting.  Oaks are not quick to leaf out in spring...Oak waits and watches.  Living Oaks are also great healers.  For a human, staying in an Oak forest activates the blood flow, normalizes blood pressure and the protective mechanisms of the immune system, soothes chronic diseases such as joint pain and helps faster recovery after an illness. 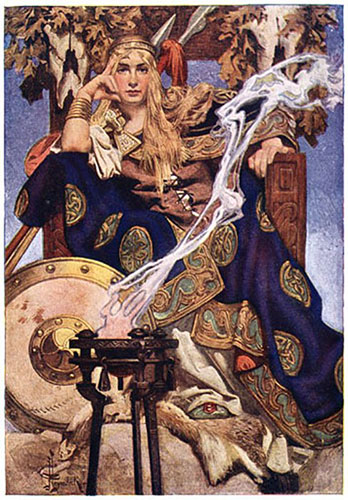 In the British Islands, a wisdom school arose that incorporated the Celtic word for Oak into its name. The word  Druid comes from deru=oak tree which can also mean strong and firm and wid=to know.  So Druid has a double meaning as "Oak knower" or  "strong knowledge".  The Druids were an elite hierarchy.  Both men and women were Druids. It took twenty years of study to become a Druid and the schools taught their curriculum not by written books but by memorization from mouth to ear.  A druid could hold many positions: a philosopher, teacher, judge, poet, musician, the repository of communal wisdom about the natural world and the traditions of the people, and the mediators between humans and the gods.  The Druid schools produced expert plant healers.  During times of conflict, Druid plant healers created sweat lodge hospitals with pools in the center of the tents.  In the sagas of ancient Ireland, it is told  "They brought healing herbs and crushed and scattered them on the surface of the water in the well, so that the precious waters became thick and green. Their wounded were put into the well and immediately came out whole."  Having an elite class, such as the Druids, implies a societal structure far from the original, woodland, communal villages of the Neolithic.  By experiencing some of the plants that the Druids held particularly sacred, we can get an inkling of a journey back to the sacred groves of the original woodland people. 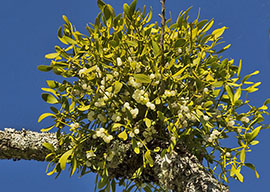 Each month, six days after the crescent moon, the Druid priests would journey to the sacred oaks whose bows held Mistletoe.  Mistletoe (Viscum alba) is a so-called "parasitic plant" that grows on a few different species of trees.  Depending upon on which tree the Mistletoe grows it will have different medicinal properties.  I find that "parasitic plants" are, in reality, giving something to the ecosystem that is not well understood in the metaphysical healing realm.  Mistletoe's evergreen leaves are sickle-shaped and have a haunting greenish-gold making them very easy to spot after its tree host has lost its leaves in autumn.  Growing not on earth and not in heaven but hanging on the tree, Mistletoe grows in a golden, spherical mass that symbolized the sun and cosmic energy to the Druids.  In winter, Mistletoes produces white berries.  Under moonlight, the opalescent berries glow in the dark and turn into a sperm-like goo when crushed.  These characteristics of Mistletoe makes it a symbol of the cosmic joining of masculine and feminine energies, of heaven and earth. To harvest Mistletoe, a Druid priest would climb the Oaktree and cut the Mistletoe with a golden sickle.  The feminine moon and the masculine sun energies also joined in the shape and color of the tool. The harvested Mistletoe would not be allowed to touch the ground but was dropped in a white cloth held aloft by priests under the tree.

The Mistletoe harvest was part of an elaborate Druidic ceremony of anointing a new king.  Two white bulls were sacrificed under the oak tree containing the Mistletoe.  Bulls not only connote male sexual power but, the bull's head is an ancient symbol for the uterus and the fallopian tubes, the seat of female sexual power.  Again, the joining of the male and female principles.   The Mistletoe's white, slimy berries were considered drops of the cosmic bull's semen and granted the new king potency.  The king then was no longer a regular man but became the husband of the goddess of the land and responsible for the fertility of the fields and herds.

Mistletoe, like the Oak, is also a keystone species.  If Mistletoe is totally removed from an environment, birds, insects, and other life forms fade away.  The Irish, Welsh and Breton names for Mistletoe were "gui" which translates as " heal all". Its powers in medicine are considerable.  It is an immune system tonic, anti-tumor, a sedative, can bring on menstruation, and can bring on childbirth or abortion.  But Mistletoe is very dose-dependent and can kill in large amounts.  Certainly, the Druidic healer priests would have wanted to control its use. Perhaps, this was another reason for the elaborate ceremony around its ritual harvesting. 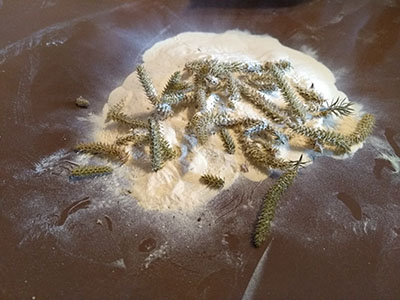 Another of the sacred plants used in ritual and as medicine by the Forest Dwellers was Fir Club Moss (Lycopodium selago).  Fir Club Moss spreads runner roots across the forest floor creating huge, interconnected colonies.  Fir Club Moss has some remarkable attributes.  Its yellow spores are pyrotechnic when thrown in the air and the reason it is called "Dragon's Breath".  The spores are still used today to create fireworks or flames that are large and impressive but relatively easy to manage safely in magic acts and theatrical productions.  It is easy to imagine the ancient Druids using this flammable pollen for magickal effect in air and water. The pollen is a hydrophopic which means you can cover your hand or another object with the pollen and insert it in water,  it will come out dry.  The pollen can also be used to make sound waves and a pattern of electrostatic charge visible in the air.  Taking all these attributes into consideration, it is interesting to note that the Druids called this plant "The Golden Herb" or "The Clothe of Gold" whose use would make users capable of understanding the language of birds and animals.  The body of the plant is a nerve tonic that can relieve pain when externally applied as a poultice but if eaten it is a hypnotic and can easily cause unconsciousness.

When the Romans invaded Europe starting in 200BC, one of the ways they tried to destroy the leadership and demoralize the people was to cut down the Oak Groves at the Druids sites of power.   Druidic political power was reduced but the worship of the native gods continued. The Roman attitude to religion was pragmatic if it didn't threaten the Roman presence, it was tolerated.   The Romans, being pagans themselves, had respect for all Gods of place and did not want to anger the local Gods while they were occupying their land.  Trying to have the best of both worlds, the Romans paired off  Roman gods with their British equivalents and erected joint shrines.  So, most of the ancient Oak Trees and the Mistletoe growing on them survived.  People continued to worship trees and nature as their ancestors had done for thousands of years. 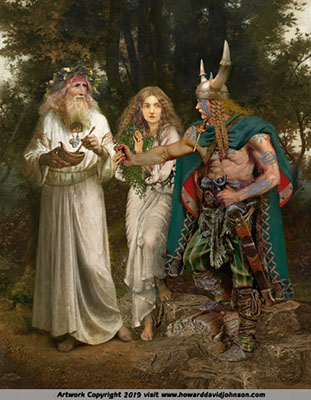 It took the heavy-handed Christianisation of Europe to end the widespread worship of nature.  Christianity has an extremely human-centered vision of the world.  This anti-nature vision is caused by Christianity's roots as a desert religion in a hostile environment and reinforced by a priesthood educated in the hierarchy of the soul, in the Aristotle tradition.  It was Aristotle that introduced the idea that plants were inferior forms of life that had no soul.  He also believed that slavery was natural and women were inferior to men.  These ideas help to understand why Western, human society exists in its current form, our environmental crisis, the witch hunts of the Middle Ages and why Christian missionaries felt they needed to destroy the indigenous mindset.    The kind of brutal suppression of the Nature worshippers is exemplified in Charlemagne's edict of 785 which he forbids the worship of trees, water sources, standing stones, collecting bundles of herbs, interpreting bird flight, soothsaying, decorating wells, engaging in festive processions to accompany the dead and more.  He then set his army to spread out across the land to uproot all the Oaks with Mistletoe growing on them.  Groves and trees were razed all over Europe often followed by their milling into timbers to build a church.  Despite such heinous acts of desecration,  It is important to note that the essential power of the Oak remained the same as the wood of the temple and the door unto spirit. 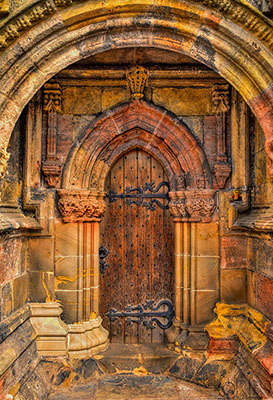 This is a loose blend packed in a 2 oz. tin