I intentionally created "The Mothers" incense using a technique to produce a rough and wild-looking incense to hearken back to the Paleolithic era not only in its fragrance but in it's visual and tactile effects.  I composed this incense with plants that have prehistoric fumigation, healing and shamanic uses that are still associated with the "The Mothers" and the winter solstice today. Plants that they were growing and readily available during this colder epoch which are still important healing and visioning plants today.*  The Mothers incense can be used to purify and connect to the spirit world during the dark days around the winter solstice but also at any time you want to summon help and protection during the thread of your life. You can use the incense as is or crumble it between your fingers before putting it on the heater.

Ingredients- all wildcrafted or grown in my garden

*Rosemary (Salvia rosmarinus) leaf extract.  Rosemary was added to the Mother's repertoire of plants in Southern Europe after the Paleolithic.  It has all the attributes of the conifer trees first associated with the mothers as it is an evergreen, with needle-like foliage that purifies the air,  has powerful healing and aromatherapeutic properties and was used in ancestor rituals. 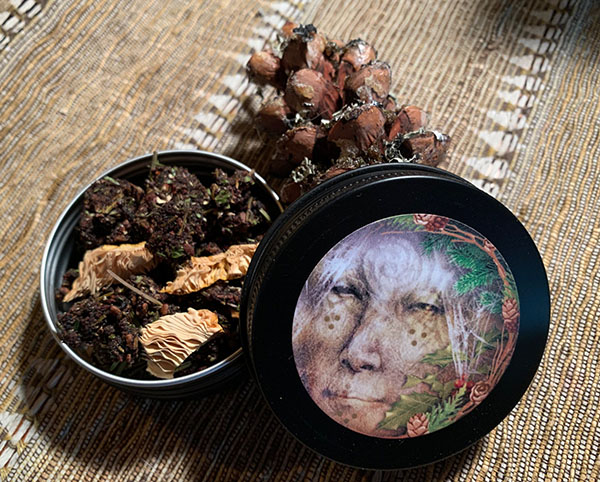 From where do the Mothers come?  The re-enactment of the birthing process is at the root of all transformation rituals. The practice of going back into the womb of mother earth to make a prophecy, heal and connect with the ancestors is ancient.  The ancients believed in the cyclical nature of all existence.  The dead were like seeds going underground to wait to be reborn.  If humans wanted to try to pierce the veil that separated the living from the dead in order to gain knowledge or favor, the caves were an obvious place to go.

"She holds dominion over death, the cold darkness of winter, caves, graves, and tombs in the earth...but also receives the fertile seed, the light of midwinter, the fertilized egg, which transforms the tomb into a womb for the gestation of new life"

The Civilization of the Goddess  Marija Gimbutas 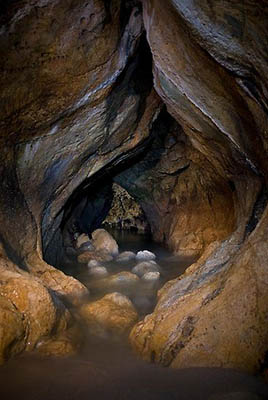 The oldest known womb caves are located close to Nice in France and their use has been dated back 25,000 years. There are other womb caves found throughout Europe.  Many were designed especially so the sun can penetrate the cave entrance around the winter solstice. During the times of their use, some caves were lit by above with hundred of flickering torches of plant material attached to the ceiling with mud.  Recent research into the cave paintings has suggested that the cave artists deliberately sought out psychedelic states to create visionary art and that up to three-quarter of the artwork in some of these caves has been shown to have been done by women.  It is in the caves that the Mothers were born...... and reborn. 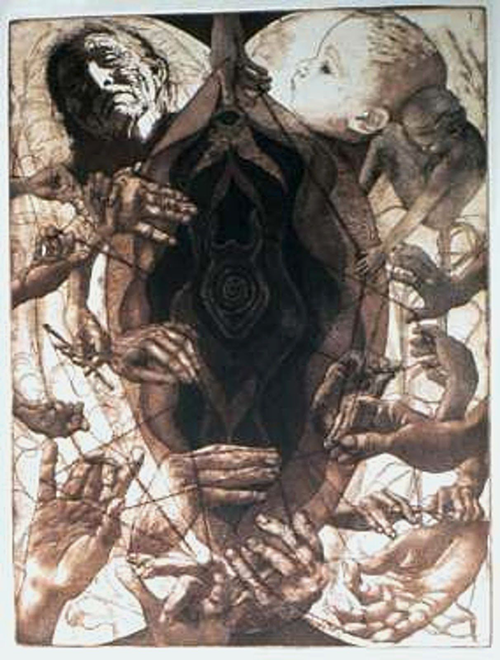 The art of creating thread for textiles is extremely important, very old and filled with meaning.  Impressions of woven flax strings, nets and fabrics have been found impressed into Paleolithic pottery.  Thread making and weaving was originally a mystery within woman's sphere.  Worldwide, among the Gods, only women are weavers.  In the Egyptian language,  the word for weaving has the same root as the word "being".

The flax plant and the art of making thread is a common theme belonging to the Mothers.  In order to climb in and out of caves as well as to find their way around in dark, large caves, woven ropes would have been used by cave worshippers.  The idea of using a string to move in and out of the winding darkness is used in the transformation myth of Ariadne, Theseus, the Minotaur, and the Labyrinth.  Ariadne gives Theseus a string to be able to find his way in and out of the Labyrinth after killing the Minotaur.  The labyrinth is an ancient symbol representing a journey to our center and back out into the world.  The thread/rope is a symbol that is a metaphor for the umbilical cord and the life itself which connects back to our ancestors. 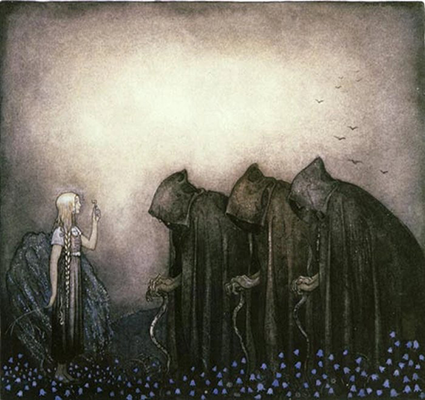 It seems likely, that the rituals performed in these caves were the source for the belief in ancient Europe that there were three women who looked over birth, life and death, ruling the destiny of both gods and humans.  Three, watchful mothers often known as the Three Fates.  The fact that this symbol of three women, almost all of them weavers and guardians of water sources, is so widespread lends credence to the idea that their origin comes from a single source in the Paleolithic and spread as people moved into the warming climate of Europe.  Over time, the characteristics of the three goddesses were blended into one goddess or were spread among many. The three women of destiny or fate were known as the Greek "Moirae" and Roman "Parcae" in Southern Europe, the "Norns" in Northern Europe, the "Zorya" of the of the Slavs and the Celtic "Matres" in Central Europe,  the "Morrigan" of the Irish and the triple "Brigits" of the Britons in the European Islands.  They were worshipped whenever help was needed and particularly around the time of the winter solstice.

One of the permutations of the Mothers that is still strong today is the German Goddess Holda.  She is celebrated in Germany on Modranicht (Mother's Night) on what is now Christmas Eve.  Holda's ancient origins as an original Mother can be seen by that she is a spinner, weaver, and cutter of the thread of life and that she lives in springs, wells, and lakes at the bottom of the water.  An obvious connection to the watery womb and birth canal. She also has three forms, that of a young and beautiful, as the lady of the house and as a wise and fierce crone.  The plants she is associated with are ancient healing and shamanic plants that still associated with the Yule season: elderberry, conifer trees, rosemary, mugwort, apples, poplar, flax, amanita and the birch tree.

There are many other aspects of Holda that tie her to the winter solstice season. She is known as  "Mother Yule" and also the "White Lady" because of her association with creating snow and her snow-white hair.  The veil between the worlds is thin during the time around the Winter solstice.  Holda is also known as the  "Queen of the Elves" associating her with the other-dimensional worlds. Also, during the Yule season, Holda rides in a chariot pulled by wild animals and protects and is accompanied by the souls of children who have died.  Her ride is often connected with, but predates, the "Wild Hunt" of the souls of dead ancestors led by Odin.  There are some who believe, considering the similarities of the origins of their names and attributes, that with the rise of male-centered, warrior culture, Holda became Odin.  With her snow-white hair, and chariot pulled by forest animals, accompanied by elves and children it is not too difficult to believe that Holda is also the precursor for Santa Claus. 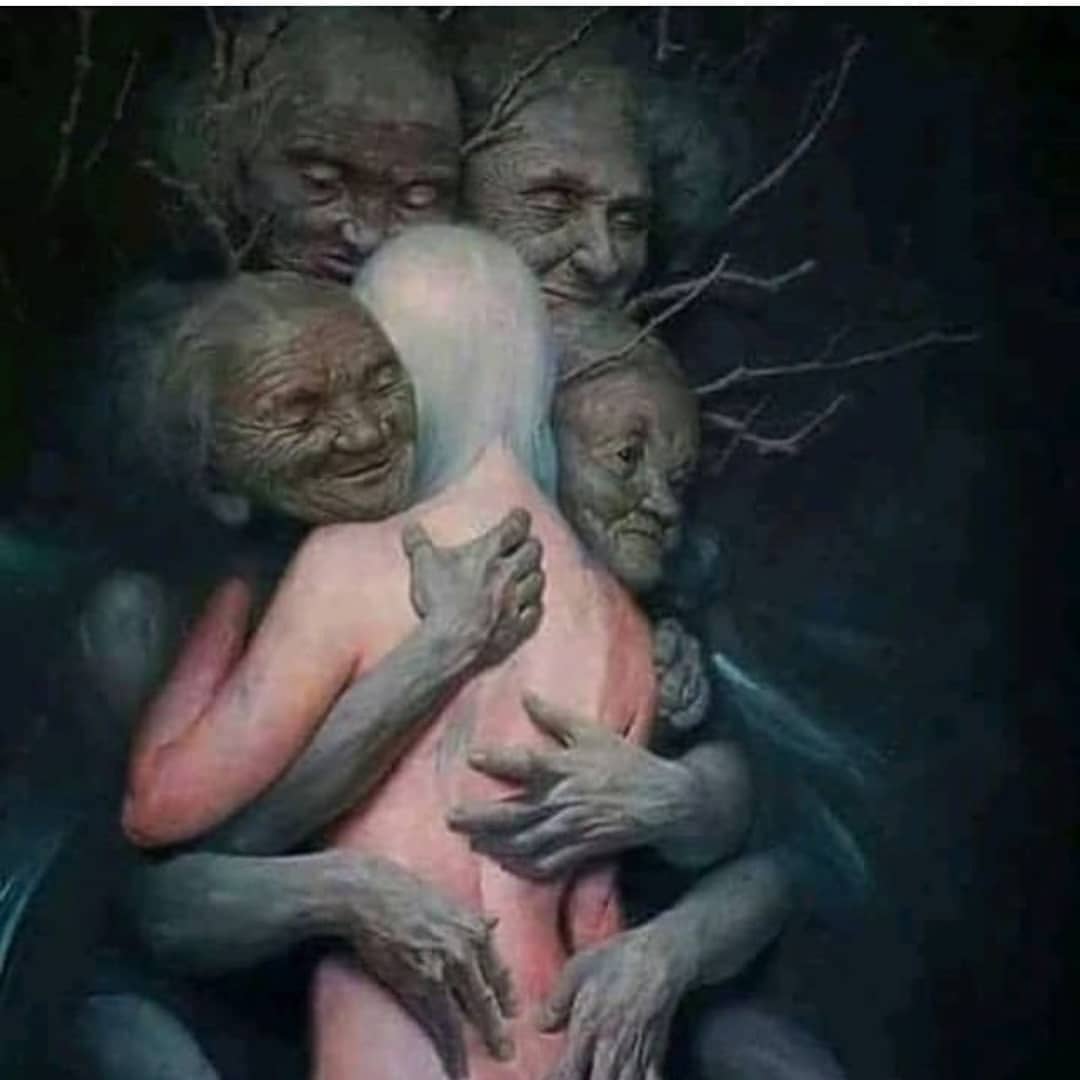 Many thousands of years have passed since the first women descended into the caves to heal, enter other states of being, connect with their ancestors and make art.  They must have certainly been hardy and healthy women following the reindeer and other herds across the landscape.  Living deeply embedded in their natural environment they would have been highly creative and natural shamans.  We can reach back and touch them through our own rituals and in smelling the voices of the same plant parents that they knew, unchanged to this day, birthing us out of their breath.

A note from Katlyn:

The fragrance and energy of this primal blend are outstanding ...Do not miss this. It is a perfect way to bring remembrance to the ancient Mothers of the Yuletide.

1 ounce comes in a black tin