An Incense for protection and to "drive away" unwanted influence...It also smells wonderful on charcoal

This is a blend of Harmala (Syrian Rue ) Seeds, Salupati resin, and Frankincense. All traditional botanicals for banishing and protection, especially against the influence of the "evil eye". This incense is for burning on charcoal only, please do not ingest, and use consciously. Harmala has a rich and diverse history, and it used is widely known throughout history. I offer it here as a curiosity for collectors and for ceremonial use. The  pyrotechnic effect it provides is fascinating and effective.

I have placed on the packet as a talisman the Hand of Fatima or "Hamsa"  - the hand of the Goddess - an ancient symbol for protection against the "evil eye" and misfortune.

The Harmala seeds are mixed with powdered Oman Frankincense  and Salupati (Sal , Shorea Robusta) Both known for their purifying and protecting qualities.

To use Harmala Hamsa incense blend, drop a pinch or two on red-hot charcoal, where the seed will make a popping, crackling noise and give off a great deal of fragrant smoke that, along with the powdered resins, are said to chase away unwanted influence. It will give forth an abundance of white smoke and the tiny seeds will crackle and "burst" with a loud pop. It is best used outdoors or in a well-ventilated area.

This price is for 1 oz. in a gold metal tin. 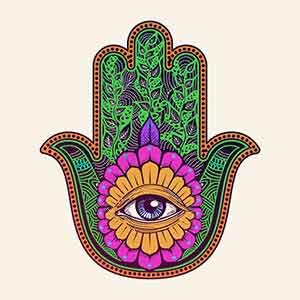 Harmala Seeds, Traditional use and Folklore:

Harmala or Syrian rue appears in the ancient literature (Dioscorides) under the name peganon. This name may have been derived from that of Pegasus, the winged horse of ancient mythology that was begotten by Poseidon, the god of the sea, and the dying Medusa. The plant has also been interpreted as the legendary magical plant known as moly and as sometimes Soma.

Throughout the area once covered by the Persian empire, a type of herb seed called Aspand, Espand, or Esphand is burned on charcoal to rid one of the Evil Eye. A short verse is recited as the smoke is circled around the person's head. Aspand is also used to bring blessings after one has performed a sorrowful rite, such as attending a funeral.

The seeds, which are used both medicinally and ritually, were imported from Persia to India by the Muslims at an early date. The plant was present in central Europe by the 15th century at the latest and was portrayed by the “fathers of botany”. In the Near East and North Africa, Syrian rue has retained its great significance as ritual incense into the present day.

Syrian rue (Harmala) was a sacred plant in the ancient Orient. The Koran states, “Every root, every leaf of harmel, is watched over by an angel who waits for a person to come in search of healing”. For this reason, it is said that dervishes in Buchara also esteem and ritually utilize harmel seeds.

Harmala seeds, in the form of small incense balls (sepetan), are still offered by burning great quantities during Nouruz (New Day), the ancient Iranian and now Islamicized spring and New Year’s festival. The ascending smoke is distributed throughout the entire house to keep away all misfortune. In Persia (Iran, Iraq), the seeds are scattered over glowing coals at weddings to ward off evil spirits and the evil eye. It is said that the smoke is also capable of dispelling epidemic diseases.

In North Africa, the Syrian rue has been regarded as a magical and medicinal panacea since ancient times. The seeds are used as incense, both alone and in combination with other plants. The seeds are scattered over charcoal to dispel evil spirits. The smoke is inhaled to treat headaches, the consequences of the evil eye.

In Morocco, an incense of Harmala seeds, alum, and olibanum is burned during the wedding night to fan the flames of desire.
In the Himalayas and neighboring regions, shamans use the seeds as magical incense. The shamans of the Hunza, who live in what is now Pakistan, inhale the smoke to enter a clairvoyant trance. The shamans (bitaiyo) then enter into a close, lusty, sexual contact with the divining fairies, who give them important information and the ability to heal.

Aspand is the common Persian / Dari / Farsi name for Peganum harmala, a perennial shrubby herb in the Zygophyllaceae or Caltrop family. The name is also transliterated as Espand, Esfand, and Esphand, and the plant itself is also given the regional common name Harmal or Harmala in Pakistan and India. In the USA its most common name is "Syrian Rue," a highly unfortunate monicker since although the leaves of the two plants are similar, Aspand is not related to Rue (Ruta graveolens) and it is not notable for growing in Syria, but rather in Iran, Pakistan, Afghanistan, Tajikistan, and India.
Aspand grows from one to two feet high and prefers a desert environment. It has finely divided leaves and bears small white five-petaled flowers, followed by seed capsules containing many small, brown triangular-conical seeds. In addition to its use in the Aspand ritual, the seeds of the pant are used to make a red dye and are used medicinally to alleviate certain skin diseases.

Harmala Seeds and consciousness:
Harmala seed is the richest natural source of two alkaloids, harmine and harmaline (their names come from the Indian name for the plant, Harmal). These alkaloids are members of a class of drugs called Mono Amine Oxidase Inhibitors (MAO Inhibitors or MAO-Is) that have been used in the treatment of clinical depression and, in larger doses, to produce psychotropic effects. In moderate doses, they produce a feeling of well-being and contentment. There are unpleasant side-effects to the ingestion of high doses of concentrated harmaline extracts, such as nausea and lassitude, but these effects do not occur when one breathes the smoke from burning Aspand. Among the most commonly reported psychotropic effects of harmaline and harmine are visual and auditory hallucinations, and it is commonly reported -- even by experimenters with no cultural connection to the breathing of Aspand smoke -- that these voices take the form of authoritative instructors. Perhaps the Aspand smoke stimulates some portion of the brain that evokes images of Archangels and Holy Kings and that -- combined with its anti-depressive activity -- is why it is considered a sacred plant that removes the Evil Eye.
Please note before experimenting with Harmala yourself that although MAO Inhibitors have been prescribed for depression, there are severe risks associated with their use because when they are ingested in combination with certain other substances, such as alcohol or aged cheese, some people experience toxic or even fatal reactions to them. For this reason MAO Inhibitors are no longer popular prescription drugs despite their efficacy at relieving depression. Also, for this reason, all companies that sell Aspand seed will tell you that it is NOT FOR HUMAN CONSUMPTION, and if you are wise, you will heed that warning.

- From the Lucky Mojo Website (always a lot of  fun to visit:)

Syrian rue seeds are said to have an anti-depressive effect and are also reported to stimulate the imagination.  Dreamlike states are said to occur when large quantities are consumed. The alkaloids in the seeds act as MAO inhibitors. In other words, they suppress the enzyme monoamine oxidase (MAO), which metabolizes neurotransmitters that are in the body but outside of the brain.  Thus, ingesting Syrian rue allows substances such as DMT to be orally active, as in ayahuasca preparations (Ratsch 1998, 427).

Sal - Salu pati, Shorea Robusta
“the deliverer of intoxicating resin”
Salupati is a resin from the tropical Sal tree (Shorea Robusta)
The Sal tree is an object of worship among Buddhists and Hindus
in India and the adjoining countries. This Tree is considered
sacred  because it is nearly indestructable and has many uses.
It it used by shamans as a traveling agent for its psychoactive properties.
The resin when placed on coals gives forth billows of white  smoke.
Many shamans enter deep trances through this incense
and all in its presence are uplifted.
(from “Shamanism and Tantra in the Himalayas”)
We have found this powdered resin to be very pleasant and
effective in journey work.

For usage and history, this is an informative site