Another of the sacred plants used in ritual and as medicine by the Forest Dwellers was Fir Club Moss (Lycopodium selago).  Fir Club Moss spreads runner roots across the forest floor creating huge, interconnected colonies.  Fir Club Moss has some remarkable attributes.  Its yellow spores are pyrotechnic when thrown in the air and the reason it is called "Dragon's Breath".  The spores are still used today to create fireworks or flames that are large and impressive but relatively easy to manage safely in magic acts and theatrical productions.  It is easy to imagine the ancient Druids using this flammable pollen for magickal effect in air and water. The pollen is a hydrophopic which means you can cover your hand or another object with the pollen and insert it in water,  it will come out dry.  The pollen can also be used to make sound waves and a pattern of electrostatic charge visible in the air.  Taking all these attributes into consideration, it is interesting to note that the Druids called this plant "The Golden Herb" or "The Clothe of Gold" whose use would make users capable of understanding the language of birds and animals.  The body of the plant is a nerve tonic that can relieve pain when externally applied as a poultice but if eaten it is a hypnotic and can easily cause unconsciousness.

DRAGON'S BREATH CANDLE FLAME MAGIC
To make a flame burst from a candle...

Take the pipette included with Dragon's Breath, place tip into power and suck some into the Bulb. Over a lit candle, squeeze the powder over the flame several times in a row. . A bright flame will burst over the candle. This fire is unique in that it does burn anything except itself.
Still as with any open flame caution should be used, have a damp towel nearby.

In this 1.oz tin is enough powder for many uses 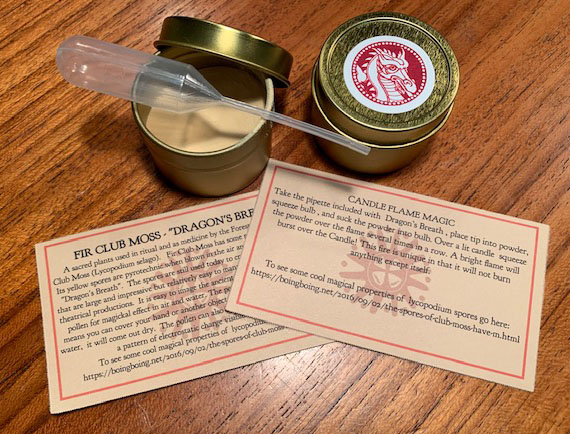