The Chinese have a long and storied history of using incense.  Their incense tradition developed along three paths.  The first path and most widespread was fumigation (xunxiang).  Fumigation was, and still is, used for purification and medicinal uses.  In the religious sphere, smoke from incense was symbolically used to establish a connection with both ancestors and the divine (fenxiang).   The third path was described as “a session with incense” (xiangxi).  Xiangxi became more and more developed under the Tang dynasty (618-907) and reached its height during the Song dynasty (960-1279).

The transitional period between the fall of the Tang and the full control of the Song was an epoch marked by political and family intrigue, poisonings and warfare.  It was into this tense atmosphere, that Li Hongii was born.  Li was a withdrawn and understandably troubled young man, destined to become emperor.  By the time he ascended the throne of the Tong empire, the Song Dynasty was already highly influential.  Unable to achieve much as a ruler, Li tried to be inconspicuous and focused, not on politics, but the arts; poetry, painting, music and making incense.  In the charged atmosphere of the court, the daily use of incense became profoundly poetic act.  While not lucky in life, Li was very lucky in love.  He was married to a highly educated and talented woman, Zhou Ehuang.  Zhou was both his lover and collaborator in the arts.  She was acknowledged as a musical genius and Li wrote many love poems to her. Li would so often cancel governmental meetings to listen to his wife play music that an official complaint was made by some of his counselors.  Tragic Bon vivants, the couple had an intensely close relationship and collaborated on incense-making, calligraphy, painting, music and poetry projects.  Most believe, it is this couple, that invented what is known as “Goose Pear Tent” method of making incense.

“Goose Pear” refers to the fragrant quince in which the incense powders are steamed.  “Tent” refers to the practise of blocking off windows and doors of a room with pieces of fine silk fabric to contain the fragrance coming from incense.    Every day, Zhou would lower the silk curtains and sit in the room with the incense “as if in the clouds and mist, and she looked like a fairy.”  she was known for both experimenting with the design of musical instruments and incense paraphernalia.  Concerned that the burning incense could cause a fire, the royal couple began to experiment with ways of making heated incense, especially for use at night while falling asleep. I can almost see the moment of inspiration for the “Goose Pear Tent” method.  I’m right there with the royal couple while they are lounging around the fire in the winter. There is a bamboo steamer on the stove for heating fruit to snack on. Fruit that can take a long storage period and while getting even more tasty and fragrant, like quince.  Incense powders on the table next to the plate.  They cut open a fragrant quince.  The center is hollow.  The top half of the quince looks like the lid of a traditional incense burner, the bottom half looks like the bottom.  The halved and hollowed quince also has the appearance of a cauldron, the ancestor of all incense burners.  The cauldron, a place of transformation with echoes of the womb. The Taoist furnace of internal alchemy.  Zhou and Li fill the hollow of the quinch with fragrant powders, replace its “lid” and put the fruit in the steamer basket.

The beauty and the brilliance of “Goose Pear Tent” method is stunning.  After multiple steamings the powders opened and mingled together with a result very similar to kneading incense.  Through steaming, the quince’s natural fragrant is increased and lightly imparted to the powders.  As well, the wall of the quince, touching the powders, absorbs some of the scent coming from the powders.  Mixing together the wall of the cauldron and the powders makes a very fragrant paste.  But the true magic of the method is that, because the quince contains so much pectin, no other binder is needed to hold the powders together to form the incense pellets.  Usually, honey or jam is used to bind pellet incense powders. The thickness of honey and jam has the tendency to hold the fragrance down.  The pectin is a light and airy binder, which has the effect of releasing a fragrance that more easily floats in the air.

The traditional formula for “The Scent of Goose Pear” is quite simple; a quince with agarwood alone or combined with sandalwood.  These three ingredients also have a history in Traditional Chinese medicine for relaxing the body.  At the time Li and Zhou invented the method, agarwood was becoming the premium incense ingredient that it continues to be until this day.  There are many very  interesting and creative incense formulas, from the Tang and Song dynasties, for processing agarwood with other ingredients.  I like the smell of agarwood and its effects. but good quality agarwood is super expensive.  I tried the traditional formula with medium grade agarwood and a good quality sandalwood but the result was nice but not glorious.   So, in the spirit of Zhou and Li, I am taking this tradition and playing with “Goose Pear Tent” to explore its possibilities.  Using other ingredients, I have started to get some very interesting results.  I feel Zhou and LI would approve…….

A poem Li wrote for Zhou

A heavenly woman is imprisoned in the palace at Mount Penglai*,
All are silent as she sleeps by day in the painted hall.
Her glossy hair is spread like cloud on the pillow,
Her embroidered clothes bear a wondrous fragrance.
I secretly come and slide the pearl lock back,
She's startled from her dream behind the silver screen.
Her smiling face is overflowing with bliss,
We gaze at each other with unbounded love.

* Mount Penglai is the isle of the immortals located off the eastern coast of China and the inspiration for the famous “Hill” incense censers. The boshanlu censers [ po-shan-lu ] or boshan ("magic mountains" or "universal mountain braziers") were an important object in every imperial scholars room. The more elaborately crafted versions incorporate imagery of trees, wild animals, and humans among the rocky crags of the landscape. The scented smoked is vented through apertures in the lid, creating a scene reminiscent of clouds swirling around a mountain. 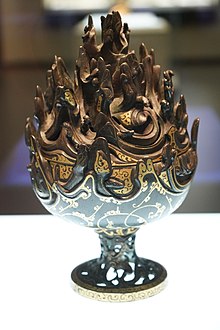 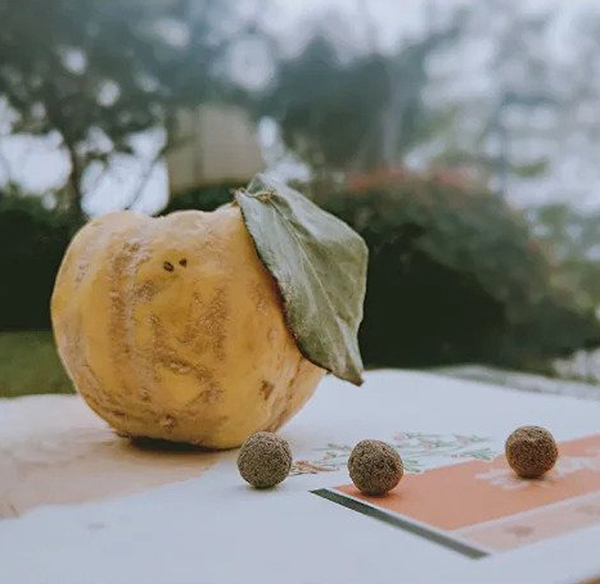